To us, the term "encyclopedia" is very familiar. A phrase that is frequently used. I'd like to share a name with you that is mostly, proudly phrased - GOWDA. Have you heard of this name before? Perhaps some of us have recently heard this name in the news.

Gowda, a 77-year-old woman, received the Padma Shri Award in bare feet from our president, Mr. Ramnath Kovinth. Do you have any idea why she was awarded the Padma Shri? Let's take a look at what this person accomplished.  Gowda was born in 1944 to a Halakki tribal family in the Honnalli village of the north Kannada district of Karnataka, India. Karnataka is a state in India that is well-known for its eco-tourism destinations, with over 25 wildlife sanctuaries, five national parks, and one of India's most developed metropolises.

Gowda grew up in a low-income family. Her father passed away when she was only two years old. As is typical of any woman who finds herself on the periphery of educated and developed people's lives and cultures. She had to start working at a nursery with her mother at a young age for daily wages. She was denied formal education even though she was of legal age. As a result of her lack of education, she was illiterate, unable to write or read. And her story didn't end there; she was married to an older man named Govinde Gowda, and her real struggles began here. The truth is that no one knows her age, and she didn't even know her own age when she was married to a very old man. The real problem of Democratic INDIA has been occurring in rural and inner areas of the country since its inception. She was, however, estimated to be between the ages of 10 and 12. Tulsi Gowda's husband died when she was in her fifties.

She was in charge of the seeds that would be grown and harvested at the Karnataka Forest Department, and she was especially concerned about the seeds that would be used in the Agasur Seedbed.  Gowda can tell the state of budding plants by lightly touching them while walking barefoot through plantations. She never received a proper education from any school or university, but she knows how to interpret tamarind, eucalyptus, and a variety of other plants perfectly.  has lost track of how many plants she has returned to the Karnataka Forest in southern India by preserving and reviving native species.

Mr. Yellappa Reddy, an environmentalist, and researcher recognized Gowda's extraordinary abilities, particularly in the area of native plant regeneration. He explains that despite extensive research in this field, 90 percent of indigenous trees in India struggle to regenerate after years of study.  Gowda, on the other hand, can locate the mother tree of each species in any part of the forest. When seeds are produced from the mother tree, plant generation is more successful. She has a good understanding of when these trees bloom and germinate, so she can pick the best time to collect seeds. She doesn't know how, but she knows because she speaks the forest's language. "Seeing her work is an incredible experience," Mr. Yellappa Reddy said.

She is not only protecting the forest, but also her people.  and another Halakki woman, Padma Shri Award winner Sukri Bomma Gowda, have been fighting to protect a member of their tribe who was threatened with a gun and nearly run over by a landowner for picking fruit from a tree. "No Halakki person has felt the need to start a battle," they said at the press conference, "but we will protest vehemently if the perpetrator of this crime is not punished."

Tulsi has retired from the forestry department and only returns to bring the best seeds she finds, but this strong Halkki woman hasn't stopped raising awareness about the importance of plants, flowers, and herbs. She always explains to children the importance of protecting and nurturing the forest. "We all have to pitch in," she said. Allow children to plant seeds and care for them as they grow."

The forestry department has prepared 120,000 young plants to be distributed as part of a Mangaluru urban redevelopment project. A city on the INDIAN OCEAN'S shores. The plan calls for the creation of large green spaces as well as the assistance of growers. The first 10,000 plants, which come in 35 different varieties, will go to the Mangaluru Smart City project, which will help the coastal city's long-term development.

TULSI GOWDA has been awarded the Padma Shri, the fourth highest civilian honor, in 2020 for her invaluable environmental contribution. She was barefoot and dressed in a traditional sari when she received the Padma Shri. Her hair was tied in a bun and she wore gold jewellery around her neck and wrists.

This is a powerful lesson for those of us who believe that education, culture, language, skin color, money, positions, and other factors make us superior to others. Tulsi Gowda is an illiterate tribal woman who cannot speak more than one language, but she understands the language of life. Perhaps she does not belong to the culture where parents proudly proclaim that their children are ordering food using a mobile application even when they are not with them, while Tulsi Gowda is teaching the next generation how to protect the environment that provides us with life. She may not have received her education from high-status universities, but she knows more about trees and the environment than anyone else.

Those who judge and classify people based on their skin color, I must say that they pale in comparison to Tulsi Gowda's glory. She isn't motivated by money or positions; instead, she believes she is fulfilling her responsibility, which is shared by all humans who use this environment. Everyone has a responsibility to protect our environment. It is now fashionable to spread life and love only within the confines of one's own home and family. She teaches us here to spread love and life throughout the entire world.

Tulsi may not be for everyone, but we will do our best to follow in her footsteps.

Let us commit to planting a seed at least once a month, beginning right now.

Take a look around. Feel the waves of life. 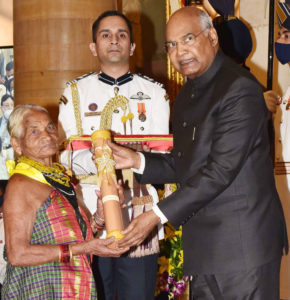